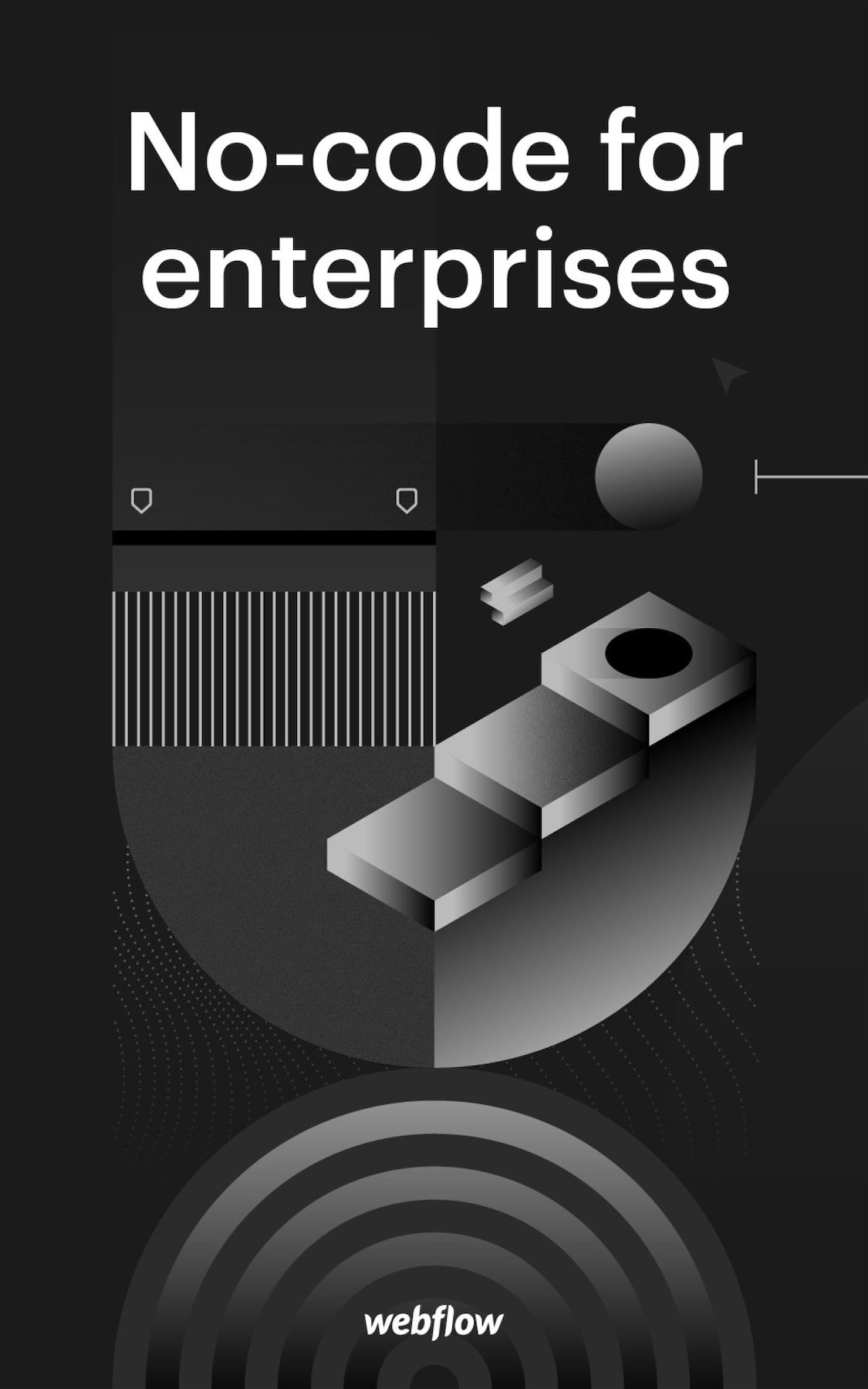 Unlock your access to No-code for enterprises and other ebooks.
We will also send a PDF version straight to your email so you can read anytime.
Thank you! Download your ebook here.
Oops! Something went wrong while subscribing.

No-code for enterprises
Chapters
1
How the no-code movement helps enterprises scale their businesses
2
Why marketing teams need to embrace no-code
3
How real time marketing fosters a growth mentality
4
MURAL moved to Webflow to bring their website back under control
5
How Webflow gives marketing teams a competitive advantage
6
Spend your cash on customer experience, not servers
7
Take your website back: Why enterprises need no-code

?
Reading time
Here are some excerpts from a conversation Webflow had with Scott Brinker: VP of Platform Ecosystem at Hubspot and editor of chiefmartech.com.

An interview with Scott Brinker (VP of Platform Ecosystem, Hubspot) has been condensed and edited.

How do you summarize the no-code movement from your perspective?

I summarize the no-code movement by saying it's essentially giving the power. That you used to have to rely on experts — specialists in a particular discipline — to do things for you: web development or app development or integration, or a whole bunch of things that now as a general business user, you can do many of these things yourself.

The label I’ve applied to the no-code movement is ‘citizen creator.’ I lean on the phrase citizen creator because we should think about it as anyone can do this. A citizen in the broadest sense of the word, Creator because that's really what it's about. It's about eliminating all these barriers that existed between having an idea and delivering something out to the world.

What’s your history with the no-code movement and how have you seen it change over time?

I was preparing the keynote for the 2018 MarTech conference and I was seeing enough examples of how people were using tools like Zapier to connect different tools to their MarTech stack. So I brought together this panel: the CEOs of Zapier and If This Then That, and the CMO of Tableau, and we just started to chat about no-code. At the time, most people, even if they were using some of these tools, didn't actually see the connective tissue that was greater than the sum of its parts. That was when I really started getting interested in no-code.

But now, in these past few years, no-code has been a rocket ship in pretty much every dimension. The number of solutions that we could put under this banner that are in the market; the growth of the most popular solutions such as Webflow; the adoption rates. We're really seeing people take advantage of these tools and it feels like the start of a golden age.

What are the most common misperceptions of no-code in the marketing world?

I think probably the biggest misconception is still about the “no-code” label. If people are unfamiliar with this space, they tend to hone in on the code piece and they're like, “Well, I wasn't coding things in the first place, so why would I need to use ‘no coding’ tools?”

But this misses the point. For all those things you wanted to do that you couldn't get done or you had to file a ticket for, or had to spend $10,000 on an outside agency, those are all tasks that, all of a sudden, there's just an entire swath of tools to help.

Now, you can just create. If you can draw an idea on a whiteboard, you're not that many steps away from actually turning it into something real that you can share with the world. Anyone can take advantage of no-code.

Another misconception is that when people think of no-code they think it can only apply to a relatively narrow universe of things — some sort of programming — but I do think the scope of what's possible in the space is much larger.

I sometimes use the analogy with artificial intelligence (AI) and machine learning, which has been another popular topic in marketing because of the big impact it’s having. At this point, every major marketing product out there in the universe has some sort of machine learning capabilities built into it. And it's making life easier for marketers without them even consciously realizing that they're using machine learning power and tools to get their job done.‍

What areas of marketing tech dramatically need the most reshaping or help via no-code?

Let’s pick three challenges marketing has had: Producing interactive digital content out in the world quickly, integrating multiple technologies that might exist within my MarTech stack, and then data analysis and really being able to self-serve insights about what’s working.‍

What types of team members do you see doing the no-code development work?

Digital marketing in particular exploded the number of use cases and the number of things that companies needed to do to engage with customers online. You had this whole emergence of the MarTech industry, which has grown to thousands of products.

Marketers then ended up taking on these tools, partly because they needed to get the work done and also because these tools were a lot easier to adopt. In the early days this was called shadow IT. This digital transformation journey has gone hand in hand with the democratization of technology.

And while it’s great that everyone now has this power, we do need some governance. You have to pay really close attention to how you’re managing data. There are real, legal implications, especially from a compliance perspective.‍

What’s the first step for a company interested in no-code development?

There's the first step that most take, which is somebody has a project and a credit card. And they just do it themselves with a particular tool. They do a project and share it and people find it kind of cool. Then someone else has another project and asks to learn the tool, and it starts to spread organically. Once it starts to get recognition by executives it's because there's actually quite a few success stories.

And when you have the discussion at the executive level, eventually there’s a feeling you should standardize on a couple of these tools so there can be common training, more reuse, and more sharing. Once executives see individual people use these tools to create something of value the value of them is no longer theoretical. It’s already working for you today. So then you wonder how you scale it up? And that's just a much better conversation to have. You can look at a lot of platforms and see this pattern of empowerment.